We will host a number of amazing film premieres and screenings. Some films will be presented with introductions by the filmmakers.The first annual New Jersey Horror Con and Film Festival. March 31-April 2nd 2017 at the Crown Plaza Hotel in Edison, NJ.

Our mission is to inspire and promote talented New Jersey and the Tri-state area independant filmmakers & artists. The New Jersey Horror Con and Film Festival provides opportunities for you to mingle with celebrities, networking, exhibition, and screenings. We provide a unique experience for the public to experience films often with the filmmakers available to answer questions and share experiences with the audiences.

NJHCAFF was created by filmmaker Ryan Scott Weber and Producer and pop cultures Rob Bruce to support independent film and filmmakers in the independent communinty. The film festival is surrounded by a convention atmosphere with celebrates and vendors to create a perfect networking and movie fan and filmmakers event.

One of the festivals creators, Ryan Scott Weber has worked as director, writer, producer, actor, cinematographer and editor on 4 feature films, Mary Horror, Sheriff Tom VS. The Zombies, Witches Blood and his more recent Pretty Fine Things (best actor at Horror Hound Film Festival) and also his TV series ‘ZOMBIES INCORPORATED’ which is in its 3rd season.

Rob Bruce who is also one of the festivals creators is also very well accomplished. He is known for being consulting producer and on -air “Expert” at AMC’s “Comic Book Men”. Comic Book Men is in its 6th season. He also has a role in Comic Book Men as well as other films Burn in Hell and Shooting Clerks. With more than 25+ years experience in the Collectible Pop Culture world Rob Bruce is the perfect person to create something like the New Jersey Horror Film Festival with Ryan Scott Weber. 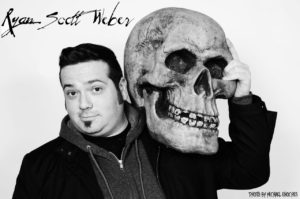